The Tenors Three are our talented ensemble consisting of three incredible young tenors who offer an uncommonly flexible performance with either recorded orchestral accompaniment or a wonderful live pianist!

Inspired by ‘The Three Tenors’, their repertoire focuses on English, Italian, Neapolitan and Spanish operatic songs, with some truly beautiful arias from renowned Operas.

The Tenors Three originate from Greece, Italy and Portugal respectively and first performed together while students at the Guildhall School of Music & Drama in London in 2009.

Matteo is the Italian.  He studied in Italy with Gilda Dalla Rizza’s pupil, Paolo Badoer, in the Universita’ degli Studi di Padova, at the Steffani Conservatoire in Castelfranco Veneto (Venice) and has recently achieved his Master in Music in London at the Guildhall School Music and Drama (GSMD).  In addition to performing in Italy and the UK, he is a Professor at the GSMD and Italian coach at the National Opera Studio.  Musical research and history of music are also part of his commitment both as a performer and as a musicologist.  His main repertoire focuses on the Italian Romantic and Veristic Operas written by Verdi, Puccini and composers from the “Giovine Scuola”. 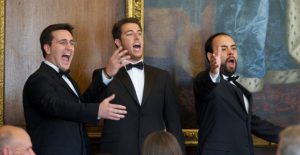 Alberto was born in Madeira, Portugal.  He graduated in Vocal Studies at Universidade de Aveiro with Antonio Salgado and has recently finished the GSMD Opera Course, studying with Laura Sarti.  Alberto was a student of the 2011 edition of the Solti Te Kanawa Accademia di Bel Canto. Following this he recorded 2 tracks in a CD of Italian songs produced by Richard Bonynge and was invited to sing for the 2012 edition of the Solti Peretti Repetiteurs Masterclass. He specialises in Italian repertoire but has also been highly commended for his ease with other languages and his acting skills. Critics have described him as ‘someone with belcanto potential’ (Opera Brittania) and with ‘excellent enunciation’ (Classical Source).

Alexandros was born in Kenya, is of Greek origin who lived between Africa, Europe, Asia and America. His undergraduate studies at Jacksonville University, Florida, included a BA in Music, Commercial Aviation & Flight Operations, and languages. He also completed his Masters of Music at the Guildhall School of Music & Drama in London. Being multilingual, Alex is a versatile singer, and has been described as an “exciting young voice” who thrives in Italian, French, English and German operas. He continues to excel in opera both on and off the stage, focusing on performing on many of the great venues around the globe.