Abbi, soprano soloist, read music at Royal Holloway, University of London, and was awarded Distinction for her advanced postgraduate diploma at Trinity College of Music in 2006. Supported by vocal department and choral scholarships, she studied with Hazel Wood, Robert Aldwinckle & Eugene Asti and took part in masterclasses with Michael Chance and Emma Kirkby.

“…Zerlina, now a junior secretary, was sung with energy and precision by Abbi… in a wonderfully flirtatious performance that had real chemistry with her hopelessly-besotted fiancé, Masetto….” -Opera Now

Equally at home on stage or on the concert platform, Abbi is an experienced Oratorio soloist, performing regularly with choral societies around the UK. She is a member of Chamber Choir Ireland enjoying a busy schedule of concerts and recordings in Ireland under the musical direction of Paul Hillier, and also sings with various UK and European Ensembles, recently working with Coro Casa da Musica Porto, The Gabrieli Consort, Ars Nova Copenhagen, Theatre of Voices, The English Concert, English Voices and La Grande Chapelle. She is also a member of the 5-voice ensemble Papagena, a group which explores the wealth of music written specifically for women’s voices, from 11th century to present day. 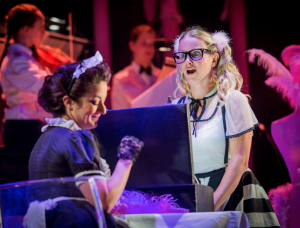