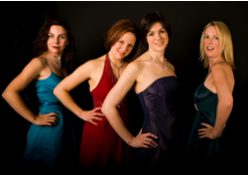 The performance of these opera babes at your dinner or party will bring down the house… The girls give a stunning performance including gorgeous harmonies and solo numbers. Depending on the scale of your event and budget they can be perform in full format with four voices, or reduced down to three or even two to enchant at smaller functions.

Sara, soprano (the fiery leader) earned her Masters Degree with Departmental Distinction in Vocal Performance from the San Francisco Conservatory of Music. Her operatic lead roles include Gretel in Hansel and Gretel and

Susanna in The Marriage of Figaro, and she has performed in many venues such as Covent Garden’s Royal Opera House and Painters Hall. Read more about Sara

Cath, soprano (the sassy blond) completed her studies at the Guildhall School of Music and Drama. Her performances include Cinderella in Steven Sondheim’s Into the Woods and she has performed on the Palladium stage, at The Royal Albert Hall, The Palace Theatre and Westminster Abbey. Read more about Cath 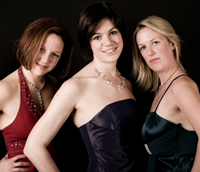 Ksynia, mezzo soprano (our tall and gorgeous brunette) completed her Masters at the Royal Academy of Music. She has sung roles such as Cherubino, Hansel, Nancy, Dorabella and Carmen for a variety of companies including Raymond Gubbay, the Buxton Festival, Northern Chamber Opera and Philharmonia Voices in venues such as the Royal Albert Hall and the Barbican. Read more about Kysnia 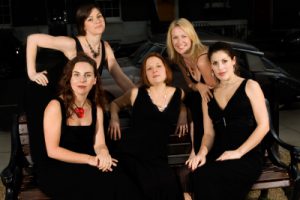 Lisa, mezzo (our petite and beautiful brunette) completed her Masters of Performance in Opera at the Sydney Conservatorium of Music. She has sung as a soloist at the Tri-nations Rugby League, the Design Awards, and for audiences including the Australian Prime Minister at Angel Place Recital Hall in Sydney. Read more about Lisa

Amanda, soprano (another beautiful blond) completed her studies at the Royal Academy of music and the National Opera Studio. She has sung roles such as Gilda, Pamina and Donna Anna, with many of her roles taking her across the UK and abroad. Read more about Amanda

Lina, soprano (yet another stunning blond) completed her Masters degree at Trinity College of Music. She has performed many operatic roles including Belinda, Ilia and Cupid. Read more about Lina