FourVoice are an exciting and versatile vocal quartet based in London. The a cappella ensemble have a wealth of experience in performing along with a beautiful sound and professional focus. The quartet has performed on Channel Four, performed gigs the Royal Exchange and St Johns Smith Square performed to sell out crowds at the Edinburgh Fringe and are frequently in demand for weddings and corporate events.

With training from former Swingle Singer Linda Hirst, they write many of their own arrangements. They have been lucky enough to have a concert broadcast live on Harrow Radio. They were also the support for Russell Watson, Kerry Ellis and Rhydian at the Proms on the Thames. They featured on Classic FM’s No. 1 charity single, ‘Steadfast’, alongside Alfie Boe and Katherine Jenkins. They went on to headline a concert with West End star Kerry Ellis and most recently they were broadcast singing live on Magic FM. 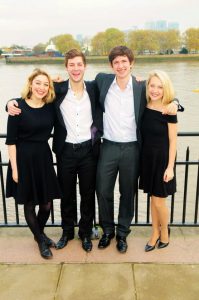 They have begun performing regularly throughout the UK and have recently made their singing TV debut on Channel 4. This dynamic group have performed in venues across the UK in venues such as Claridges, Regent Hall, St Alfeges to St Giles, Edinburgh. They performed extensively in the Edinburgh Fringe Festival and were popularly received with great reviews.

“I’d just like to say a massive thank you to the Hartley singers for creating a really festive atmosphere in store at the weekend. I’ve had some amazing feedback off staff and customers – it certainly made the shop feel very Christmassy indeed!
John Lewis (Harley Voices A Cappella Carol Singing Quartet – Countdown To Christmas Event, 24th November 2013, London)”

Here is a sample of Four Voice’s repertoire: 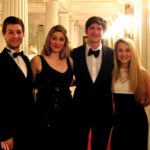 Reviews for A Cappella Quartets…